Malichor – Lurkers in the Crypt 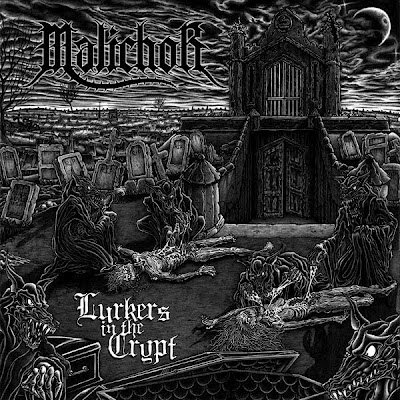 Malichor is a black/thrash metal outfit from Melbourne, featuring former and current members of Anarazel, Denouncement Pyre and various other groups.

Malichor’s style deviates from the usual balls-out black/thrash assault that you may be used to, focusing more on maintaining a dark and murky atmosphere. The majority of the riffs plod along at a mid-tempo with occasional melodic tendencies Lyrically, Malichor focus on Lovecraftian themes, which fit in very well with the mid-paced nature of the music. The rhythm section provides a nice and heavy backdrop for the catchy tremolo riffs and typical blackened vocals expected of the style.

Production-wise, “Lurkers in the Crypt” is a bit murky and dark sounding yet with a professional polish to it. Each of the 4 tracks is a catchy mid-pace stomper, but they all sound distinct from each other with “Jackel’s Spell” being the highlight and I was also quite fond of the opening title track, which instantly found itself stuck in my head.

All in all, “Lurkers in the Crypt” is a solid fourth release (first EP, following three demos with the first two being released under a different name) for Malichor and I will be very eager to check out anything the band releases in future.