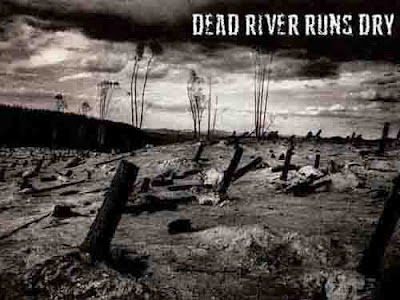 While not exactly straying far from the standard conventions of the black metal genre, Dead River Runs Dry manages to avoid most clichés that tend to constrict the genre. Their sound is raw and untamed, evoking a pessimistic atmosphere that conjures images of a dying world. The songs tend to shift between mid and extremely fast pacing, giving the structure a nice amount of variety. The riffs are catchy and generally a bit thrashy with the occasional “epic” and “grandiose” feel to them. The rhythm section is very tight and solid, driving things along exceedingly well. The vocals are sickening shrieks and gurgles, with the occasional clean part, not atypical of the black metal genre but perfectly appropriate for the sound this band presents.

Considering this is just a self-released demo, the production is album quality and sounds very professional and well-done. The song structures have had a lot of thought put into them and its clear the band were not in a rush to release this demo. The amount of time and effort put into this music really shows and I will be keeping an ear out for anything else these guys work on.