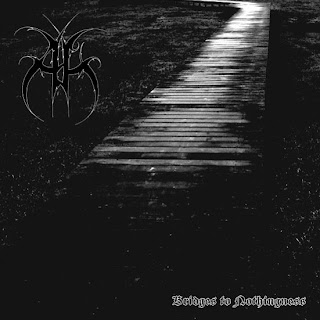 There’s no doubt that when one looks into and does a small bit of research into the French Black Metal scene, that you will come across hordes upon hordes of worthless crap—but on the plus side, there also shines some diamonds underneath the tainted surface— which brings us to ANNTHENNATH...a band which (I feel) keep true to the aesthetic of Black Metal in a very much traditional and closed-minded sense. Yes, I don’t think that this band will be attempting to change the long-lasting face of Black Metal any time soon—And damned to hell any bands will be who ever attempts to do so…of course, we can interpret genre evolution in many different ways and I even believe it is good to try and infuse some “different” elements into a sound...just AS LONG as its done within certain parameters. Anyone with one half a brain will understand my sentiments. “Bridges to Nothingness” is a compilation album featuring various unreleased material with some tracks taken from their demo’s and a total of three new tracks that were solely recorded for this particular release subsequent to their 2010 debut “States of Liberating Departure”. For the most part, the tempo floats along in the mid-pace vein allowing the atmosphere to sink in. In fact; I think one of the band’s strong points is definitely to create a very mournful atmosphere. The drummer is able to come up with some pretty inventive fills and possesses the ability to change a beat with smooth precision...quite a skilled little skin beater this guy. Behind the mic; we have Mr. Shaxul from LEGION OF DEATH fame delivering some seriously sick and hoarse vocals to go hand-in-hand with the eerie ambiance of the guitars. I think Shaxul did a very good job with the vocals, as it seems to be quite out there. My favorite tracks are the first three; “Life Abhorrence”, “Death Glorification” and “Nothingness Achievement” - which is the band’s more recent material as far as the compilation is concerned. These songs seem to have a more lasting effect on my ears than some of the other tracks…but let me also mention “Rivières De Sang” with the tortured shrieking and almost folk-like melodies...an epic track indeed. The last track on this compliation “Suicide Onirique” is nothing but a complete inaudible filler and would’ve been a better choice completely left out...Anyway, I’m not going to praise this as something immensely special - because its not - but certainly it will provide for a rather enjoyable listen to anyone with an ear for all things minimalist, cavern and black.