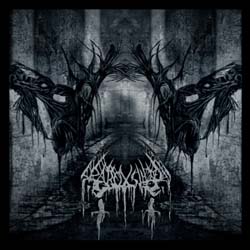 Paroxsihzem hail from Canada and play a style of suffocating and cavernous black/death metal that sees them lumped in with fellow Canadians Mitochondrion and Antediluvian. Their self-titled debut was released mid-late last year on Dark Descent records.

Paroxsihzem is an ugly beast to behould, relying on some serious bottom-end tones to shroud the musc in an extremely dark atmosphere. One interesting thing to note when listening to this album, is that the drums are used most chaotically here, while the vocals and string instruments are less so. This defining characteristic contributes very heavily to how cluttered and confusing everything sounds. It's an interesting approach to music that helps this band to stand out. Samples are used throughout the album tastefully, deeply adding to the dark atmospheres and making this listening experience all the more disturbing.

"Paroxsihzem" is not the type of album where you find "stand-out" tracks, as I find it is best approached in it's full form, to help one appreciate the density on display here. Although, if I were asked to recommend a song, I would probably have to go with " Deindividuation", which contains a bit of everything that makes the album work, from haunting atmospherics, to crushing aural darkness and well used, creepy samples. Lyrical themes on this track focus on the Stanford prison experiment conducted in 1971 by Doctor Philip Zimbardo.

If you're into bands such as Portal, Mitochondrion, Antediluvian and the like, you really should give Paroxsihzem's debut a listen, it's a nightmarish and harrowing piece of work that is guaranteed to make your skin crawl.