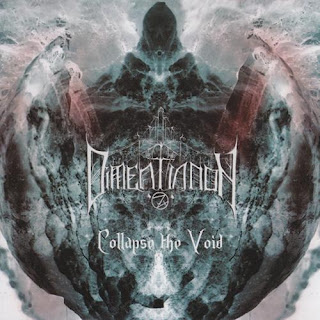 Despite the release date, I haven’t seen any reviews on here so far for this album, so I thought I might do it some justice by reviewing it. Well, first things first; DIMENTIANON—which I have no fucking idea what it means—set the benchmark in 2010 for Blackened Death Metal with their third full length album “Collapse The Void” which is 100% trend-free in every aspect…There is absolutely no use of any gimmicks here whatsoever—the only thing DIMENTIANON focuses on is making the listener’s ears bleed with enigmatic Black/Death Metal full of rich textures with solidly crafted songs. Not only are the songs arranged firmly, but the whole atmosphere on this album bleed with piognancy and emotion. Nothing “light” to be found on here-- The overall ambiance is more gloomy than anything else…afterall, the music drips of obscurity. One thing I have to point out about what makes this album such an enjoyable experience is just how experimental the whole album is…There’s a definite psychedelic vibe to go with the progressive tendencies and the result is conclusively fresh. Collapse the void is not your typical black/death affair due to its experimental side – but there are more than a few occasions where a well-round dose of frantic blast beats are applied to add to the album’s intrinsic worth. I must mention that the overall sound on this album is very good backed with a tight performance from everyone in the band. I’m especially fond of the hoarse-like vocals that have a very prominent lead in the mix. The guitar soloing is nothing short of superb with its 70’s prog-rock vibe. Across the spectrum, there’s also an usage of low-key sythesizers that makes itself known on the slower, more Doomier parts. The album is immensely diverse and experimental, yet never tends to throw the listener away from the music. The riffs are melodicly adequate without sounding too much like ear-candy…and for me that is a very positive thing. Any bands who are able to construct proper melodic hooks without compromising their brutality are on the right path. DIMENTIANON has somehow managed to come up with something untried and dynamic with a sound that has enough grit to appeal to the fans of bands like ARKHON INFAUSTUS...yet with just enough epic dark melodies to get followers of WATAIN excited. In other words, a greatly balanced record. The album contains 5 tracks with the whole deal clocking at 27:35 minutes. All the tracks flow together as a whole so it would be somewhat suggestive to listen to it in its entirety, which I can promise you, doesn’t contain too many wasted moments.