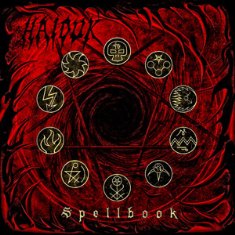 My initial thoughts was that this was going to be the same old average run-of-the-mill melodic Death/Thrash affair based on a review I had previously read before – however; to my glorious surprise, it turned out to be quite the contrary. HAIDUK brings a handful of sharpened blades to stab, shred and devour anything and everything that is brought forth to the slab; like a maniac with an insane craving for all things pale and fleshy —yes boys and girls—HAIDUK will literally fucking KILL you…The compositions are very riff-driven with a continously driving catchiness that is as heavy as it is memorable. The riffing is quite interesting… There are some really epic moments to be found throughout, but for the most part the music chugs away at a relentless pace. Imagine THE CHASM, but with a bit of a faster, and more thrashy edge. The 'vokills' of Luka Milojica are of a granular nature and brings to mind Karl Willits -- certainly, this guy has a good strong bark and it compliments the death rumpus rather well. All instruments are immeasurably well executed even the programmed drums give the auditory somewhat of a mechanical grind-like feel although, I will admit to myself that it has a certain tendency at times to make the songs sound a bit slightly repetitive and recurring…but certainly that is a factor that can be overlooked as “Spellbook” is a riff-blast from beginning ‘til end. The lyrical concept surrounding this release seem to deal with magick and occultism, so I suspect the creator behind this project to have a deep interest in mysticism. Also, to add to that – the lyrics are very well written and seem to have a strong ideology behind them. 10 tracks and 32 minutes of total Death carnage…you have been warned.
Posted by Vagabond at 4:37 PM