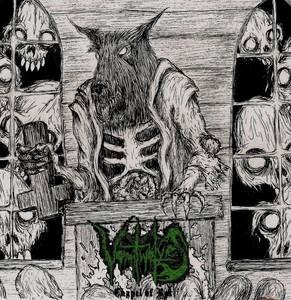 “Chapel of Rot” marks the official debut release by the black/death elite, Vomitwolves. The band delivers a raging style of black/death, taking hints from Adorior and Bestial Warlust.

The music is uncompromisingly aggressive, fast and brutal, with a female vocalist redolent of some evil, fire-spitting demon from hell. Right from the word go, the hellish onslaught pummels you in the dirt, proceeding the assault, kicking and hacking at your battered fucking body like some malicious entity with zero compassion for human flesh. The wolf kult is a two-piece unit, which consists of Jill Mwar, handling vocal duties, and Jared Mwar, handling everything else such as the bass, guitar and drums. Concerning the instruments, there’s really not too much to be said other than that everything seems relevant and well executed.

The recording quality is pretty barbaric, but seems to compliment the music well. My only hassle with the band is the piss-poor logo and artwork… It really looks awkward. Like a cover of brothers Grimm book. I would definitely look into it if I was the band, unless of course they prefer to have a fairytale artwork, then by all means. Strong material like this requires a strong visual representation to complement one another.

The release in question rages at a blistering twenty minutes, summing up eight tracks of pure hellish warfare and defacement of religious ethics. I’ll be keeping an eye out for any future material from these warmongers. In the mean time, I’m going to enjoy raping my ear holes with the aural devastation that is “Church of Rot”. Recommended.