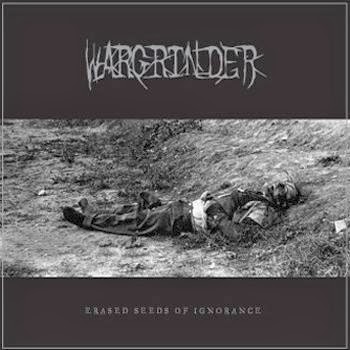 WARGRINDER is a band originating from the petting pits of Greece, and have been molesting the weak since 2000. The release in discussion is a compilation, comprising of WARGRINDER's material from the period between 2000 and 2003.

Their first five tracks are taken from their debut album, titled: "Command for Wargrinding". The remainder of the tracks are taken from split releases they've done with the likes of BLASPHEMOUS NOISE TORMENT and WAR HAMMER COMMAND. The sound is pretty obscure, and best described as Black/Death with a slight sodomization of Grind. The entire output is rather putrid and acrid in sensation, which brings to mind the hostilities displayed of bands such as ANGELCORPSE and UNHOLY ARCHANGEL. Low hoarse-like vocals echo in the background, only to emphasize the atmosphere, while the drums fires forth in speedy, yet fucking gritty precision. The quality of the sound recording is rather cavernous, but seems to be an accentuating factor to the band's style. As you play through the songs, there seems to be a definite steady improvement in terms of quality. Most of the featured tracks aren't exactly very extensive, but do tend to hover just over the two minute mark. If I had to make a personal choice then it would be the tracks from the WAR HAMMER COMMAND split.
In conclusion: "Erase Seeds of Ignorance" is a good compilation, underlining the band's early years and consequent development with each release. Contact REGIMENTAL RECORDS for your copy.