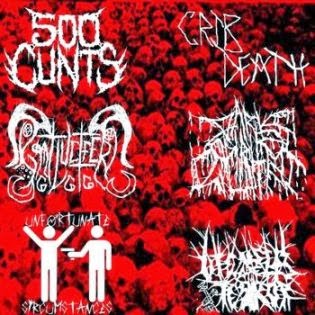 The following tracks I'm about to review is by Goatlucifer and taken from the split with 500 Cunts/
Unfortunate Sircumstances/Crib
Death/Dark Spirits Within/Utensils of
Terror.


Goatlucifer is the manifestation of Bläk Blüd, who solely recorded and composed all compositions in question; the music is best described as extremely primitive black/death enhanced by a caveman production recalling the demo era of bands like Beherit and Abhorer. Yep, this is the kind of primitive noise that’s liable to make you vomit fucking black.

Ill put an emphasis on the awfully primitive nature of the music, and the fact that this is most likely not going to appeal to everyone. On the other hand, I perfectly understand what’s articulated here; just another metal freak like you and me, who decided to record some noise for the sheer fuck of it, and surely enough, I think Mr Bläk Blüd has done a good job at that… However, I do feel the music can benefit a great deal with a better sound, so please keep it mind Mr Bläk Blüd.

I’m not entirely sure if Goatlucifer establishes itself as a serious entity, since the logo looks like it was drawn by a three year old… but its like i’ve mentioned before: the passion is totally evident, although the band seems pretty lackluster in the visual department. At least make some effort for a better logo, and if not, then ask me, and ill try to get you someone who can make you one (for free).

Ten tracks of primitively structured, ugly Black/Death worship that was recorded in Bläk Blüd's very own batcave. Try to stomache this shit… if you can!!!!