Bastard Priest - Under the Hammer of Destruction 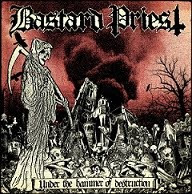 What do you get when you mix old-school Swedish Death Metal such as Entombed, Nihilist, Dismember and Grave with D-Beat style crust/hardcore punk such as Discharge, Doom and Wolfbrigade? If you answered "Bastard Priest" then you’re absolutely correct! This two-piece from Sweden is one of those rare bands you come across that does everything right.

These guys have one of the best guitar tones I’ve ever had the pleasure of hearing, and their drum sound is unreal. The vocals are more in the crust punk style with a strong hint of death metal “grunting”, the styles mix together really well here.

The first track of this album “Blasphemy From Hell” grabs you by the short and curlies right from the get go! It starts off punky and aggressive, leading into a slower riff/solo/whatever section that kicks all kinds of arse, eventually speeding up again and kicking more kinds of arse! The track closes off with a church bell rising, which for some stupid reason fits in just fine.
Track 2, probably my personal favourite off the album “Visions of Doom” gives off an old-school death/thrash vibe at the start, reminding me of early Sodom and Sepultura (which is no surprise considering the Seps had a lot of punk influences for a death/thrash band). This song is just menacing and apocalyptic.
The third song “Evil Pain” is a shorter, more straightforward and punkier song. Good riffs, great drumming, insane vocals. No complaints from this punter!
“Total Mutilation” kicks in with some really cool drumming leading into a slow section with some epic guitar parts and the occasional grunt which then leads into another short and sweet punky death metal tune that varies between slow and fast parts. It also features an awesome guitar solo!
“Power of Death” brings to mind late 80’s old-school death thrashing madness! Picture early Sepultura and Nihilist having a drunken jam. It’s also catchier than the clap in a seedy bar room full of hookers.
The intro to Chock sounds straight out of a horror movie, really slow, filthy and dirging! This is the instrumental track of the album, it shows that these guys really know what they’re doing and aren’t fucking about.
Next up is the title track, which begins with a very short apocalyptic intro before the riffs and drums kick in and grab you by the pubic hairs again! This is a damn good track that really represents what these guys are all about. The cool instrumental/solo section is a definite highlight.
From Beyond is a straightforward death Metal ripper! Very evil, very enjoyable. Not much to say about it, really, it’s just a killer track that’ll get your head banging.
The next one “Merciless Insane Death” really shows off Inventor’s guitar skills and is filled with excellent riffs. The vocals also really shine through here, pure madness radiates in that voice. Nothing bad to say about this one.
Time for the final original song on this release “Graveyard Sacrifice”, and what a way to close off an album! It holds up to the standard of all the other songs here and pummels your head in with excellent drummer, crazy riffs and those MENACING vocals!
The last song is a cover of a band called Bombanfall. In a nutshell: I’ve never heard of Bombanfall in my life before hearing this cover, but this cover makes me want to check them out.

So all in all, this is a great release that I simply have nothing negative to say about. I’m very glad to have this as part of my small vinyl collection and urge all you metalpunk maniacs out there to buy this album.

http://www.bloodharvest.se/
Posted by Vagabond at 5:25 PM