Drünken Bastards – Horns of the Wasted 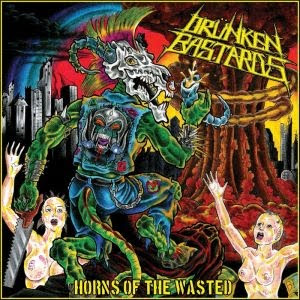 Ah, booze and thrash metal, are there many better combinations in life than this? Well, throw a bit of black metal and old-school hardcore/crust punk in the mix and you have Hungarian maniacs Drünken Bastards. Man, what a delicious cocktail this is!

The album starts off with a sample/intro thing called “Nuclear Era” which sets a mood of intensity that the guys keep up throughout the album. The first actual song “Toxic Patrol” shows that these guys really don’t fuck around. It’s straight into the high-speed riffs, speedy drums and intense hardcore and thrash influenced vocals that are hard to compare.

The intensity is kept up throughout this whole album, but there are also a few comedic moments thrown in. The guitar sound reminds me of black/thrash bands such as Toxic Holocaust, Abigail and Trench Hell to name a few, played with a punk rock attitude at hyper speeds, you’ll also find some obvious “Motorhead moments” in there. The drums have D-beats and “thrash beats” for the most part, which keep things moving at a booze-fueled furious pace that rarely slows down. The bass isn’t very audible, but it definitely is there once you pay enough attention.

This album doesn’t really have any “stand-out” tracks, but what can you expect from a straightforward face ripper that clocks in at just under 20mins? This is the kind of album you chuck on when you want to bang your head, forget about everything else in your life and just not think. Even the two covers (“Destroy the Factory” by Eat My Fuk and “Prophecy Of The Evening Star” by Barbatos) fit the mood and intensity of the other songs so well that I didn’t even realize they were covers until I read the track listing a bit closer!

In a nutshell: this is a great slab of wicked sick thrash and you should buy it right now.

BUY IT: www.thecoffinsslave.com
Posted by Vagabond at 3:10 AM