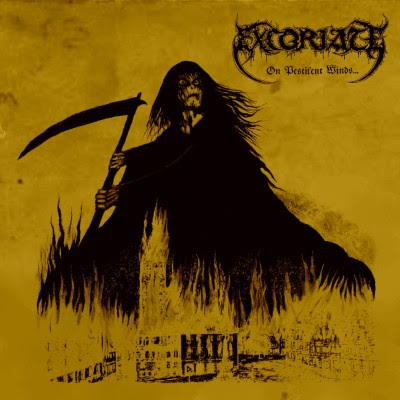 “Unique” seems to be a term that gets tossed around a lot these days, especially when discussing music. It’s the kind of word that you really have to take with a grain of salt, especially within an oversaturated genre such as Death Metal. If I were to tell you there was an old-school sounding DM band formed in the 2000’s that DIDN’T sound like any other specific band, would you believe me? Probably not. Excoriate is that band.

Excoriate was a band consisting of old-school metal maniacs from Germany. “On Pestilent Winds…” was the only full length they recorded before breaking up in 2006 (it was actually released posthumously in January 2009).

When I say this band is unique, I don’t mean they’re reinventing the wheel or anything like that! There are obvious influences lurking within this bands filthy brand of OSDM. The most prominent influences I’ve noticed in their sound are Asphyx, (early) Sepultura (who’s song “Mayhem” they cover on the album), Hellhammer and Possessed.

Now, let’s get into a bit of detail about the sound. The guitars here reek of that old-school “chainsaw” tone with an air of morbid atmosphere in the way they’re played, the guitar really sets a mood on this record. Bass is audible and fits in with the guitar sound I just described, not much else to say about it really, it just adds that certain “thickness” to the atmosphere, like a good bass sound should. The drumming is tight and works well for the different sections within each song. Vocals sound like Lemmy and Jeff Beccerra having a fist fight about who’s manlier.

The songs on here certainly don’t follow any specific formula unless you count “sound as morbid and old-school as possible” as a formula. For a release that reeks of so many ODSM influences, it’s really refreshing to hear songs with a good amount of variety and originality, and this is what sets Excoriate above the rest of the pack.

I’m not going to go deeply into describing what each song sounds like on this record, as I feel it’s one of those old-school metal releases that needs to be experienced for oneself. This may be straight up “Old-School Death Metal”, but there’s a lot more to it than that. Basically, if you’re a DM fan who needs to hear something suffocating and evil that doesn’t follow any trends or copy any of the legends yet still sounds like it was recorded in the early 90’s, get your filthy mits on this!

5/5 This is definitely one of the most original Death Metal albums I’ve had the (dis)pleasure of hearing.

BUY IT: www.thecoffinsslave.com
Posted by Vagabond at 1:06 AM