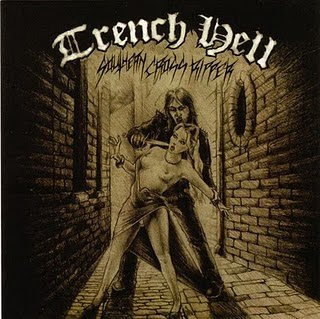 Trench Hell is a 3-piece old-school Heavy/Thrash/Speed metal band in the style of Motorhead and Running Wild with heavy Hellhammer influences. It’s an odd melting pot of styles that seems to work very well for the band. Their EP “Southern Cross Ripper” was unleashed back in 2008.

The band is spread around between the NSW central coast and Canberra, Australia. It’s three members have been involved with a lot of underground Australian acts including Kill For Satan, Psychrist, Shackles, Gospel of the Horns, Urgrund and Nocturnal Graves (not to mention the guitarist, Hexx, was also a live member for Toxic Holocaust).

If this info doesn’t get your panties wet then stop reading now.

These guys certainly don’t muck around, the first intro “Night Stalker” starts off with a straightforward fist pumping riff that straight away made me think “FUCK YEAH, MOTORHEAD!”. The guitar tone is great, you can hear the bass and there’s no triggered drum poofter shit going on here.

Track 2 “Southern Cross Ripper” continues the vibe the intro gave off with thumping bass, catchy as hell riffs, a good drum sound and those Tom Warrior vs. Lemmy title fight vocals. There’s also a killer solo about halfway through. Basically this song is everything good old fashion ‘eavy fookin’ mehtul should be!

Now for “Armoured Fist”. Seriously though, do I even need to discuss this one? What’s not to love about a song called ARMOURED FIST? Needless to say, it kicks in with a fast riff that’ll have you nodding your head straight away. Just another straightforward fun as hell metal song! The way heavy metal damn well should be.

“Morbid Crimes” again punches you in the face and instantly has you banging your head, although I would consider it to be my least favourite track on the EP (in saying that, it’s not a weak track at all, just not as great as the others in my opinion). Basically it’s consistently energetic and has a straightforward feeling drenched in an old-school Hellhammer styled atmosphere.

“Last Rites” is the longest track on the EP. With more variety in the pace, what sounds like some bitch getting raped in the back ground and a much more sinister vibe than the other songs on offer here, this is my favourite of the release. It has a very morbid vibe that is unmatched by the other tracks.

The final track “Infernal Screaming” is a faster “speed-metalish” number that brings forth a definite early Running Wild influence in the instruments. An excellent choice to finish things up with.

All in all, if you’re a fan of Hellhammer, Motorhead, and filthy sounding old-school heavy metal in general, I would highly recommend skipping over to www.thecoffinsslave.com and buying this directly from the guitarist himself, you won't regret it.

BUY IT: www.thecoffinsslave.com
Posted by Vagabond at 5:16 PM