Does old-school British Death Metal with a dark and eerie Incantation “vibe” sound like your kind of thing? Are you a fan of morbid and dark music that will take you on a journey to the deepest, darkest depths of your own mind? Well then, I’ve got something for you, ya creepy deranged bastard. 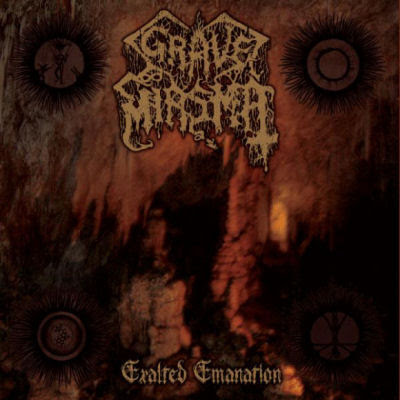 Grave Miasma are a bunch of OSDM maniacs from London who clearly pay no attention to what’s going on in the world of so-called “Death Metal” these days and just crank out the old shit the way they like it. They started off back in ’02 as Goat Molestör, with a slightly more black metal orientated sound, before later becoming Grave Miasma.

“Exalted Emanation” is technically an EP, but the production and length make it feel like a full length album. Upon listening to this, you can tell this is a band that’s taken their time to put together something great. They’ve set themselves a standard here.

The songs on this release are deeply drenched in a thick and evil atmosphere comparable to early 90’s DM acts such as Incantation, Profanatica and even black metal bands such as Blasphemy and the like. I’d say they’re up there with newer DM bands such as Witchrist, Vasaeleth and Sanguis Imperem to name a few. This is also a pretty varied release considering the style on offer here.

The songs flow together so well that I can’t pinpoint any stand-out tracks, but in a way that’s the beauty of a record such as this. It’s one of those releases where you have no choice but to put the CD in the player, vinyl under the stylus, cabbage in your bum or tape in the player and let the beast possess you from beginning to end. It’s solid and consistent all the way through.

What to expect: a dark and crushing guitar/bass tone that will cave your skull in, intelligible yet harsh and menacing vocals, killer drumming and an atmosphere that seeps throughout the whole EP and deep into your very soul. This record will possess you.

BUY IT: www.thecoffinsslave.com
Posted by Vagabond at 6:24 PM