Your debut, ''Towards the Blaze of Perdition'' was released on Putrid Prophet Productions. Please tell us a little bit about this label, the amount of copies pressed, and the feedback that you've received from the underground press.

PPP is, or rather was a young label created by our friend. Well… although he did well with a part of his job, there were too many problems with cooperation with him. There’s too much to get into the details, but that’s why we’ve decided to find new label. To be honest, there wasn’t very much feedback, promotion left much to be desired, but while I’m not that kind of man who seeks attention and over-cares about opinions, it’s not a big problem since we’re still very young, underground band.

I know there was a 2 year delay with Putrid Prophet to put out your debut. This must have been frustrating?

Yeah, as I said, there were plenty of problems with PPP and to say frustrating as fuck is like to say nothing. Anyway, we shouldn’t have such problems anymore since our new label (Pagan Records) is very reliable and professional.
A lot of bands find themselves in these shitty situations. Their third album is already done by the time the label releases their debut, haha. How long were you working on the material? Are you satisfied with the final outcome?

While “Towards…” was in the process of composing, there were many interruptions in existence of the band (line-up changes etc.), so it took a few years to complete this release. And yes, we’re satisfied with the outcome. We haven’t avoided some mistakes and flaws, but that’s pretty natural. No need to complain, this is the past and we’re focused on the future.

Many people are uncomfortable with the idea of ''open-mindedness'' in Black Metal, and have a strict, elitist attitude towards the genre. Do you see this as a good or bad thing?

Please share some insight on the bands/propaganda that inspires your music.

We draw inspirations from various sources. Books, discussions, our own reflections and practices, dreams and from life itself. Musically, we’re also inspired by many bands, but I don’t like to mention any particular ones that have an impact on me, for they are just hosts of who influences us most, and His name is the Devil.

Are there any limits that you set for yourself when composing your hymns or are there no rules at all? Do you look for any inspiration outside extreme Metal?

Our aim is to destroy the borders, not only when it comes to the ideological/spiritual part of our activity, we try getting the show to the road in every aspect of our lives. When you listen to our second album, you’ll be able to hear many inspirations outside extreme music. There are no restrictions. Nothing is real, everything is permitted!

In one interview you stated that you draw inspiration from other sources as well, not just Satanism. Tell us a bit more about these 'other' sources if you don't mind.

Yes, we’re into the cults of Persia, Egypt, India etc. His manifestations have various origins and appear in countless forms. Our aim is to draw His power from as many of them as possible.

They said rock music, comics and rpgs will get you into the occult and they were definitely right. Christianity teaches ignorance and blind faith while The Serpent give enlighten. The promethean flame. The gift of Satan. Your thoughts?

It’s not about christianity only, you know. All monotheistic deities are devourers of energy, something like parasites. Instead of teaching to unleash our hidden power, these religions assume feeding the supposed absolute, the demiurge, and any effort of reaching him is considered an utmost blasphemy. On our path it’s something purely right to reach for Wisdom and unite with the divine.
What do you think reality really consists of?

It depends on what do you consider as reality. If by reality, you mean the kingdom of demiurge and worldly life, so then reality is a cage suppressing our true divine potential, a prison for Will, that should be destroyed by ultimate rejection of the tyrant’s laws and transfiguration of our ego. It’s a long process and aim very difficult, but necessary to achieve, if one wants see beyond the veil. 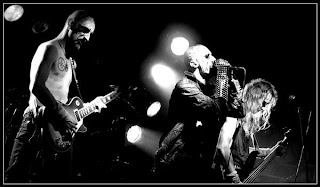 Churches tell christians that Satanists drink cat blood and kill people, and commit acts of ''evil'' to worship the ''devil'' and then christian fools that want to rebel against authority and against god do what they think Satanists do, and then once again the Satanist gets the blame. Your thoughts?

I don’t really care about christians and what they think or do is not of my concern, but it’s purely natural that we get the “blame” for everything. I’ll tell you even more, it’s a proper phenomenon – we are their spiritual adversaries, so it’s just fine when they see it. When Satan doesn’t inflame extreme emotions, something isn’t right, don’t you think?

Your EP ''Deus Rex Nihilum Est'' was released on Daemonokratia Productions and limited to a minimal 100 copies. How many copies did you guys receive from Daemonokratia and how do you feel about this release? Would you ever consider releasing it as a '7EP maybe?

We’ve received 10 copies if I remember correctly. Not a big release, but as we’ve never got any copies of the split MC with Pseudogod from Malediction Records, we’ve decided to spawn this material alone. There is a plan of releasing it on vinyl with bonus track (a cover of Polish legend Xantotol), but no details so far.

What attracted you to the left hand path and made you decide that society's ways are obsolete?

It probably started with common fascination towards Devil’s music, because I was too young to understand such subjects as LHP. As I was growing up both physically and mentally, I slowly started getting deeper and deeper into the altered forms of spirituality and as I still don’t have enough Wisdom, I will continue to learn ‘til the end of me.

A lot of so called ''Black Metal'' bands care only for shock value and hide behind a pre-conceived image. What's worse is that a lot of these bands are self-proclaimed ''satanists'' but do not know a single shit about the occult. This is really pathetic in my opinion. What do you think?

I don’t give a slightest fuck about the bands that consider the essence of Black Metal just as a theatrical image. What I preach via Blaze of Perdition has deep spiritual meaning to me and I don’t understand what sense is in creating such art just to make (often unlistenable due to lack of talent) noise. It’s a very shallow attitude, but I don’t see myself as any Black Metal messiah, who preaches what’s right or wrong and tells people what to do. Fuck it, let everyone speak for themselves.

Right now you are working on a second full length, which will probably be unleashed by the time this issue is published. What can you tell us about this upcoming opus and how will it differ from Towards the Blaze of Perdition?

Second album entitled “The Hierophant” is already being shaped in studio, we’re just after drum recording session. New material will differ pretty much from the debut, it will be more dynamic, aggressive and I’ll even risk to say “catchy” - contrary to a bit monotonous “Towards…” - just perfect for playing live. And since we’ve decided to be a live band, we’d like our ceremonies to be executed properly. Not every music fits live performances.

Well, thanks for answering my questions. The last unholy words are yours.

Thanks for the interview. Wield the torch proudly to keep His fire burning eternally