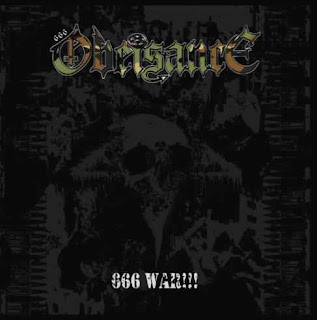 
Nothing much has changed since the band’s last album, “unholy, Unwholesome and Evil” – a definite highlight in their career – somehow, the music presented on “666 War!!!” seems to pack less of a punch than its predecessor, yet still manages to maintain enough grit and dirt-ridden charm to please all the warmongers out there.


I really don’t feel it’s necessary to pinpoint any comparisons or influences here (and so cliché) since I feel that OBEISANCE is pretty much in a league of their own as far as blasphemous, war-enthused Black/Thrash. On the other hand, I will admit that the spirit of bands such as VENOM, SLAYER and BATHORY are all too present here. Once the first track, ‘Emperor of Gehenna’ kicks in, you should know what to expect – no flashy musicianship, fancy production, or singing about trolls, love or dark forests – none of that superfluous shit – THIS IS WAR!!!


OBEISANCE definitely share a close kinship with a lot of today’s “bestial” bands, but the difference here is that the band has been doing this for quite a while now as opposed to the recent “goat metal band of the week”. I find myself enjoying this album more on repeated listens, and tracks like, ‘Emperor of Gehenna’, 'Goat Destroyer' are regular winners … “666 War!!!” probably won’t go down as one of the most memorable Black/thrash albums in metal history, but contains enough menacing bruteness to leave your senses shattered.