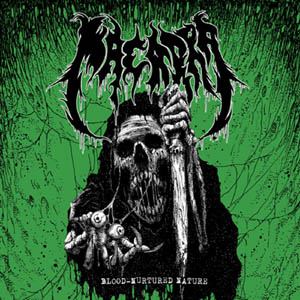 MACABRA is a Belgium/American joint alliance featuring Mark Riddick, who is better known for his crotesque artwork than for his music. The band’s core aim seems to be geared towards playing Death Metal in the purest old-school tradition reminiscent of the early ‘90’s – and might I add that they’ve done a damn competent job at doing so.

“Blood-Nurtured Nature” consists of eight tracks of pure old school Death Metal worship, with songs chucking away at durable lengths of which 5:38 is the longest — and 3:10 the shortest. Some obvious influences shine throughout like AUTOPSY and INCANTATION, though only a fool with a rather narrow-scope or who’s half-deaf would regard MACABRA as a “copy-cat” band. They do have a significant sound of their own, intentional or not.

One of the many aspects I enjoy of listening to “Blood-Nurtured Nature” must be the fine usage of keys implemented in certain parts of the songs. This adds a very dense sort of horror ambiance. There are a few things that makes “Blood-Nurtured Nature” a compelling listen – one of which I note the above mentioned element and also their ability to write rather virulent riffs that dribbles morbidity. Every now and then the band launches into death/doom territory with a cut like ‘Thick Slars of Morbund Fat’ that starts with a slow tempo build with church bells humming in the background. Throughout this particular track your ears are treated with some really cool sorrowful leads and piano passages.

Anyone who is as enthusiastic as I am about purely morbid and obscure Death Metal drenched in the slimy culverts of the late ‘80’s/’90’s era is liable to take a liking to MACABRA … but for those looking for something deviating from the conventional path of the genre should look elsewehere. This is raw, unpolished and straight-forward – the way its suppose to be, but with a sense of melody and the (dare I say) “groovy” parts make for a very enjoyable listen ... Fear not, the goove-laden parts are well executed and doesn't come off as a fruit basket in any sense. Most of the songs batter away at a mid-pace with simplistic, yet well thought-out riffs with some impressive guitar solo’s, espescially the one featured in 'Hominal Peel Diggers’ – what a ripper.