1. Hails Stephan!!! HAIL OF BULLETS, at least to my ears, has a distinctive sound (but with the obvious Dutch element, of course) – was this an initial aim or natural occurrence? What would you say sets HAIL OF BULLETS apart from most other Death Metal bands?

Hey James, well thank you. It’s always good to hear that people think you have a distinctive sound. When we started this band, we did not have any plans to re-invent the death metal wheel, but we did plan to transport our musical influences that reach back to the 80’s and early 90’s into a sound that fits the present. So no crappy, lo-fi retro sound cause I can assure that most bands in the 80’s and 90’s did their best to come up with the heaviest sound possible. Sometimes both the bands and the producers simply did not have the money or experience to come up with a better sound. Of course those recordings sounded great back then but going back in time and trying to reproduce the productions/sounds of the eighties in order to sound ‘true’ or ‘vintage’ is pretty silly if you ask me. I think the combination of old school metal influences, a powerful, massive sound and the intention to paint a complete picture of war, from the lyrics and the melodies to the artwork sets us apart from most other bands.

2. How would you sum up the band's lyrical themes? Which members contributed to the lyrics?. I know your drummer, Ed Warby (Gorefest, The 11th Hour, etc), put in a lot towards the songwriting on your first album...was it the same case with your second album, "On Divine Winds"?

Ed is still the most productive one when it comes to writing riffs and songs for the Bullets, with myself coming in second these days. The lyrics are mainly Martin’s thing. When we started with the 1st album he already had the complete story for that album in his mind for years…. he was simply waiting for the right band/music to come along where he could ventilate his concept. It got a bit tougher for him with the 2nd and now the 3rd album. Obviously he does not want to repeat himself but we still want to come up with strong, war-related concepts. Right now he’s putting the finishing touches to the lyrics for the 3rd album. 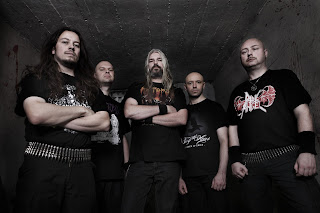 3. Your first album "...of Frost And War" reached the German charts at number 75 – it must've been an amazing feeling? I guess it has got much to do with the fact that your label, Metal Blade, had a strong promotion?

Actually it was our 2nd one, “On Divine Winds” that reached the charts at number 75, but yes it was a great feeling. On the other hand you must face that sales figures in the pop music sector have gone down more rapidly than in metal, so nowadays I guess you can enter the charts when you sell like 15,000 albums in the first week of its release as opposed to the 90’s where you had to sell at least 30,000 albums in the first week to break the charts. But the idea to have death metal albums entering the charts is fun of course.

4. So far, Dan Swano has done production values for both full lengths. Was he an obvious choice? Would you tell us a bit about this collaboration?
Which other producer would you have considered working with if not with Swano?

He definitely was our first choice. Dan is an icon in the metal scene and a great guy to work with. During the recording process of the 1st album we never met him in person. But meanwhile that has changed of course. Although he more or less hates the actual recording process and prefers to concentrate on mixing and mastering he was present during the first day of the drum recordings this time around to set up the microphones etc. As for other producers, people like Kurt Ballou (Black Breath!), Neil Kernon or this upcoming Swedish guy Ronnie Björnström would have been good options.

5. All releases for HAIL OF BULLETS so far has had strong productions. Do you think that, in some sense, that has also helped to get some of the newer generation of metalheads into your sound? Do you agree that, for some, this could perhaps even have been a gateway to older bands?

Yes, I’m pretty sure about that. You can’t expect young kids to move over from deathcore bands to more old school bands who have a sound like they are still living in the 80’s. don’t get me wrong; I prefer most bands from the 80’s and early 90’s to almost ANY band that was formed this century, but like said earlier, to me it comes across as kinda ‘forced’ to sound retro/vintage…

6. All the members in HAIL OF BULLETS have had past involvement in Death Metal bands and can be considered seasoned "veterans". On that note, would it be relevant to say that HAIL OF BULLETS is some sort of "supergroup"?

I don’t know what to think of terms as ‘supergroup’ or ‘all star band’ as it sounds kinda overdone to me actually. But sure we did leave our marks on the Dutch and in some cases global metalscene with our other and previous bands… 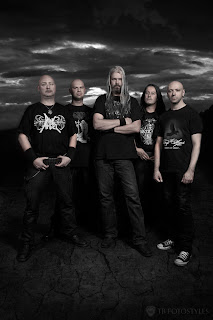 7. Perspective-wise, how much do you think you have gained through your experience as a guitarist in THANATOS and how would you compare that to your current position in HAIL OF BULLETS?

Thanatos have always been a hard learning school; we never had a strong record company to back us up, we fucked up a lot of things ourselves and basically never had much luck, so I guess I learned to persevere from that and I learned to pull through even if things aren’t going really smoothly. I’m really happy that we finally signed a deal with a good record label now and I look forward to start working on the new Thanatos album that will be out on Century Media records next year. Playing Thanatos riffs and doing vocals is obviously much harder than playing guitar in Hail of Bullets but I learned to play with more groove and I learned to focus on other things apart from pure speed and aggression. But I love the fact that both bands have a totally different sound and approach. I love both bands and I wouldn’t see the point playing in two bands that totally sound alike…

8. Lyrically and/or musically, how would you say your second album "On Divine Winds" differs from "...of Frost And War"?

Of Frost… was about the eastern front; darkness, cold, raw and brutal battles and it showed in the lyrics and the overall feel. On Divine Winds had a more heroic concept, so there was some sort of epic feel to both the music and the lyrics I guess…

9. ... And now a common question: Which albums do you regard as absolutely essential in the realms of Death Metal and which are your all-time favourites?

For me, Death Metal started with Possessed’s ‘Seven Churches’ and maybe the foundations were even laid down by Slayer’s ‘Hell Awaits’ and Dark Angel’s ‘Darkness Descends’; these albums were so much darker than any other thrash metal albums. Other essential/favorite albums are Death’s ‘Scream Bloody Gore’ and ‘Leprosy’ the first 2 Autopsy albums, the first 4 Morbid Angel albums, Massacre’s ‘From Beyond’, Entombed’s ‘Left Hand path’, Bolt Thrower’s ‘War Master’ and ‘the 4th Crusade’. Infernal Majesty’s ‘None Shall Defy’, Obituary’s first 2 albums of course and a shitload more that I forget to mention now. I think the early Venom, Hellhammer and Celtic Frost stuff was also essential for the evolution of death metal.

10. Finally, I know the band is currently in the works of the third album.
What should be expected? Cheers and thanks for your time!

We’re almost done with the recordings, we only have to record the vocals and a few more guitar leads. Hopefully we’ll get that done in the next couple of weeks. Then Mr. Swanö will channel the chaos and brutality and we’re aiming for a late October/early November release. The artwork is finally taking shape as well which was pretty hard this time cause the concept for this album (although war-related of course) differs a bit from the two previous ones. Musically I would say it goes a bit more in the direction of the first album. There are more fast songs and fast parts this time around than on ODW, but of course there’s also room for doomy and groove laden mid paced stuff. When I listen to some of Ed’s songs I would almost say that Repulsion was a big influence on him this time around. The songs are a bit more direct this time…Cheers and thanks for showing interest. 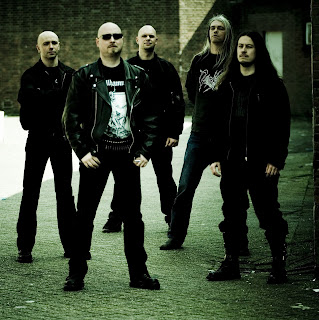