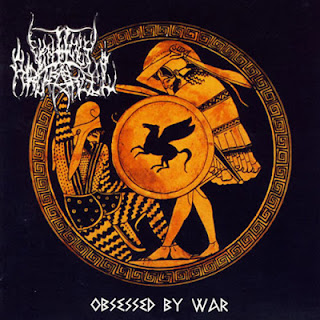 Hailing from Greece, UNHOLY ARCHANGEL have been spewing forth their brand of vomit-inducing war metal ever since their inception in the ‘90’s, gaining a cult status among Black/Death devotees. Bestial Black/Death Metal akin to the likes of fellow combatants ARCHGOAT, ABHORER and MORBOSIDAD would be a relevant descriptioin of their sound. Releasing abundantly over the years – be it demos, split collaborations or compilations – the band has finally managed to release a full length album after much anticipation.

This album opens up with the intro entitled ‘Hymn to Aris’ that lasts for about two minutes before an organic, radical barrage of hate-filled noise is unleashed by “March to Spartan” and ‘Titanbattle I’. This barbaric onslaught continues upon all mortal beings. The guitars are down-tuned with a very organic tone, creating a rather menacing atmosphere. With no indication of melody here complete and utter chaos reigns. Some interludes appear throughout the songs, like for instance the fifth track exposes some Greek murmurs prior to being absolutely brutalised by the title track (one of my favourite cuts from this album). One of the complaints that I have towards this album – is that the whole deal seem to lack a bit focus – especially as far as the structure of the songs are concerned. Also, I know “catchy” is probably not a word that a band like Unholy Archangel would like to correlate themselves with, but certainly it would’nt have hurt so much to add at least a dash of melody hither and thither. I would even go as far as to say that Archgoat sounds more rhythmic. Luckily, this fucker contains enough stabbing and jabbing to suite my cavernous tastes.

The production for this release is not so kind on the ears, so it would be somewhat suggestive for the clean production musos to steer clear of this one. Chances are slim that this kind of stuff would tickle everyone's fancy, and I shall admit the simplistic and outrageously unconventional structure of the songs can leave a bit of a bitter taste. On the other hand, those who are initiated to this kind of Metal will most likely enjoy this bitterness. Certainly, this is UGLY as ugly will ever get and definitely recommended to anyone fond of the bands I mentioned earlier in my review, and anyone who likes their metal cavernous and brutal enough to make you spew chunks. Twelve tracks and 31 minutes of absolute christ-scorching desecration from these Hellenic war-obsessed fiends!