Aura Noir - Out to Die 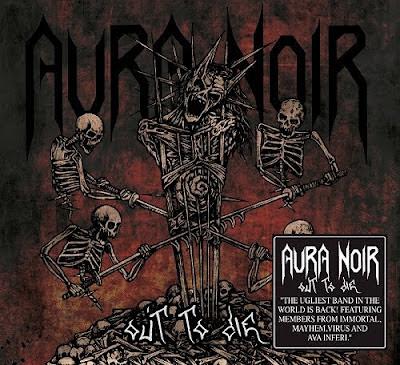 Aura Noir is a thrash metal group from Norway featuring members and ex-members of well known bands such as Immortal, Mayhem, Satyricon, Gorgoroth and others. Aura Noir has also been around for nearly as long as the aforementioned black metal acts. They started off playing a very punky form of black/thrash in 1993 and not much has changed since then; however, on their latest album “Out to Die” and previous effort “Hades Rise”, the band has gravitated towards a similar direction to later-era Darkthrone, having injected a lethal dose of Motörhead into their rotten blackened sound.

If you’ve heard any previous material from the band, you should have an idea what to expect and have no problem buying this record without even hearing it. For the uninitiated, here’s an example of what you’re in for; fast and evil tremolo-focused riffage, punky as hell drumming, raspy vocals fueled by a “take-no-prisoners” attitude, the occasional ripper solo and some of the catchiest thrash metal you’re gonna hear this year. The band does slow it down occasionally, but most of the songs fly along at a balls-out thrashing charge.

Aura Noir are not an original band by any means, but with songs like “Trenches”, “Abbadon”, “Priest’s Hellish Fiend”, “The Grin from the Gallows” and “Withheld”, I sincerely doubt anyone in their right mind will give the slightest fuck about originality. They’ll be too busy banging their heads and having one hell of a time.