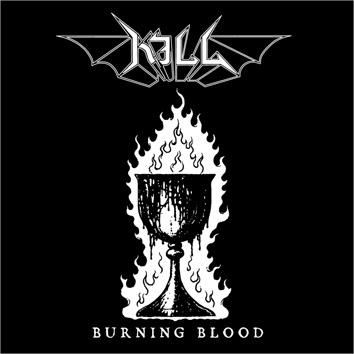 Kill is a 4-piece black metal group hailing from Sweden who have been going strong since 1998, Consisting of current and former members of bands such as; Bestial Mockery, Necroplasma, Church Bizarre and various others. “Burning Blood” is their most recent full length album, and their “come back” after going on hiatus for a while.

The opening track “Veni Satana” drew me in quickly with its stinkin’ evil riffs and vomit-poisoned vocals. Yup, this definitely sounds like Kill, alright! However, the band has clearly progressed stylistically with this release, having combined together their more aggressive and almost thrashy sound found on “No Catharsis” and some of the infectious doom-laden riffage found on “Inverted Funeral” together, resulting in a rather varied album that suits the bands sound perfectly, and may just be their best effort yet.

Production-wise, the band goes for a “live” edge similar to what they used on “No Catharsis”, but they have utilized a thicker and more “full” sounding mix this time around, ensuring the listener doesn’t miss a beat.

The songs sound disgustingly catchy and drenched in evil atmosphere. Highlights would be the aforementioned opener “Veni Satana”, “Nails of Cursed Steel”, the doomy “Beckoning Grave” and the 11 minute closer “Poison Chalice”. This is so far the best new black metal release I’ve heard so far in 2012. I’ve nothing to complain about; this is simply killer black metal, the way it should be played.