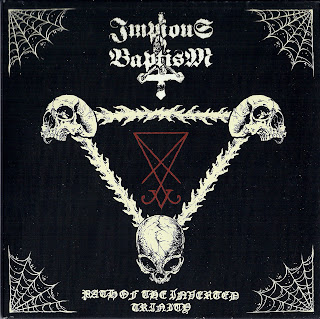 Anyone up for a second, more potent dose of tasty black/death?
Path of the inverted trinity is the second ep released this year by Impious Baptism. I originally thought that this ep would be the better ep given it was released on a more recognised label (Hells Headbangers, VANVDA was released by Ordo MCM, who were unknown to me up until then) though after listening it is clear that both eps are mandatory listens.

This ep does away with intros and kicks straight into a maelstrom of killer riffs, solid drumming and reverberated vocals. I swear i heard the lyrics include “summon the war god” but because the insert does not include lyrics for this one i can’t be sure. Another killer solo within the first minute, something about “iron doctrine of the antichriiiist” which is fitting, given this is the title of the song.

The second and third tracks, Descend from Hades and Path of the Inverted Trinity are just as great, there is no filler material present on this ep. Path of the inverted trinity has a demonic, spoken word sample before about 15 seconds of war metallish (in that its several deep voices) vocals before the standard fare present in the rest of the songs. Jarro has tapped into a potent source of inspiration for these EP's. I can only hope that Jarro chooses to take Impious Baptism to the stage one day!

There is an album in the works for this entity, these eps are just a taste of what is yet to come!
8.5/10.

I should add; I am working on a rather long review of the recent two day Black metal festival that I interviewed S. Slaughter in regards to last week. This week my free time is somewhat limited however I shall endeavour to publish a lengthy article accompanied by select photos when appropriate, as soon as I am done.

Posted by PRMTVLTRS at 1:18 AM