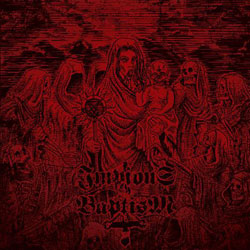 Anyone up for some tasty black/death metal?
Impious Baptism, the band formed from the ashes of Nocturnal Graves by Jarro, based apparently around the Macedon Ranges in Victoria. This project released a demo back in 2010 and was silent for all of last year. In the first two months of 2012 two eps were released by this project. V.A.N.V.D.A (Vocatus Atque Non Vocatus Deus Aderit, or Invoked or Not, the God is Present) ep is one of them.

Side A (V.A.N.V.D.A) started off with a noise intro that made me check whether the record was playing at the right speed before kicking full speed into the actual track. A killer multitude of riffs, excellent drumming and reverberated vocals are the order here. Top notch.  A short but enjoyable solo occurs midway through.

Side B is entitled Quinon Proficit Deficit (He Who Does Not Advance, Goes Backwards) which kicks off with a killer riff, brief guttural roar before the song begins. The reverberated vocals are deep, roars. Within 40 seconds there is another brief solo followed by another verse. I must restate how killer the riffs and drumming are.

Lyrics are fantastic too. The lyric sheet is in a slightly illegible script but with lyrics such as “The dragon’s blood flows through me. I have the waves of a cosmic tide embrace...”  and “The age of fire smashing the shores of lust for knowledge on iron clad storm crush the insipid fools of the age”
This release is great but far too short, however it achieves its goal of introducing Impious Baptism to a wider audience.
7.5/10
Posted by PRMTVLTRS at 1:15 AM