Ketzer is a blackened thrash metal band hailing from Germany. They’ve been active since 2003 and released a few demos between 2005 and 2007, following up with their excellent 2009 debut album “Satan’s Boundaries Unchained”, which was easily one of the best underground releases that year. “Endzeit Metropolis” is the bands second album and the follow up release to “Satan’s Boundaries Unchained”.

So, I guess the first question to be asked regarding Ketzer’s follow up to their absolute smasher debut album is; does it disappoint? The short answer would be “No, not at all.”, but, as a reviewer it’s only fair that I expand on that. Anyone expecting a rehash of “Satan’s Boundaries Unchained” may feel slightly disappointed, however, as the band has moved in a slightly more melodic and epic direction to their previously more straightforward Gospel of the Horns, and Desaster influenced black/thrash attack. 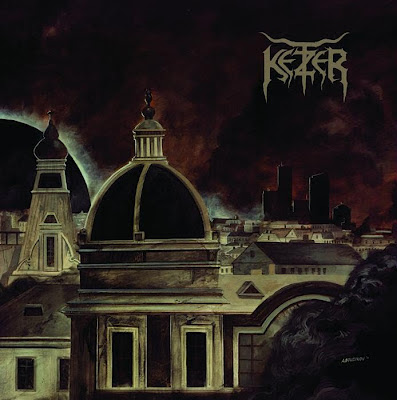 You could be forgiven for thinking, upon hearing the opening title track, that you’re listening to a new Deströyer 666 release. Furious vocals and melodic yet harsh and powerful riffs storm through the speakers, instantly grabbing your attention and giving you an idea of what you’re in for. Picture, if you will, a sprinkling of Possessed and Venom, pinch or two from each of the “big three” German thrash bands, a very healthy dosage of Gospel of the Horns and Desaster, a large helping of Deströyer 666 and an underlying Bathorian atmosphere. That’s what “Endzeit Metropolis” sounds like.

All band comparisons aside, Ketzer take all of the aforementioned influences and really mould them into a sound that they can truly call their own, I can’t think of any other black/thrash bands that sound like this, and I listen to a lot of black/thrash. It’s hard to point out exactly what makes these krauts stand out from the over-saturated crowd that is the blackened thrash subgenre, but it would have to be the little things that can only really be discovered after listening to the album multiple times. A cool bass fill here, an interesting change in the drumming there, unconventional vocal placements in that song, etc. etc. The sort of things you don’t notice, at first.

This is one of those albums that is consistently good all the way through, and thus, difficult to choose stand out tracks, but special mention has to be made for the instant ball grabbing title track, “Aesthetics and Ecstasy” and the epic closer “He Who Stands Behind the Row”, which may very well be Ketzer’s own “Teutonic Steel” or “Trialed by Fire”.

This album is a must-buy for all the blackened thrash maniacs out there. You really do not want to sleep on this gem!