Desaster – The Arts of Destruction

Hmmm, Desaster; the unsung heroes of Germany’s underground metal scene. If you’re a fan of black metal or thrash metal, you should certainly be familiar with these legendary metal titans by now. Having been active since 1988, they have released 7 full lengths as well as a bunch of splits, demos, live albums and EPs in their long career thus far. “The Arts of Destruction” is their most recent full length, which came out back in February. 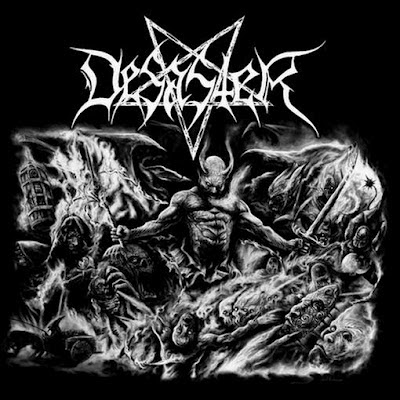 The production is crisp and clear, but not overly clean. Each instrument has its own chance to shine in the killer mixing job that was done on this record. The signature guitar tone that Infernal is known for reigns supreme as each riff crushes and every solo rips… not to mention; those odd medieval guitar parts are back! Sataniac’s vocals are on top form, sounding more on the death metal end of the spectrum than their previous vocalist, which is either a good or bad thing, depending on what the listener prefers. Personally, I think Sataniac suits the band just as well as Okkulto did on “Hellfire’s Dominion” (my personal favourite Desaster album). The rhythm section is equally as impressive, with the bass and drums sounding solid as ever and intense as hell.

Special mention must be made for the track “Possessed and Defiled”, which is an eight minute epic along the lines of the legendary song “Teutonic Steel”, albeit played at a slightly slower pace, which results in a more sinister sound and proves beyond all doubt that Desaster are at the top of their game on this album. My other favourite song on this release is “Queens of Sodomy”, which almost sounds like Swedish death metal in parts and ferociously destroys the listeners’ neck. I would also recommend looking up the songs “The Splendour of the Idols” and “Troops of Heathens, Graves of Saints” if I haven’t already convinced you that this album is instantly worthy of your money and time.

It’s albums like this, and Aura Noir’s latest that convince me not to give up on thrash metal just yet. Who needs shitty retrothrash when you have amazing bands such as Desaster still putting out killer stuff?