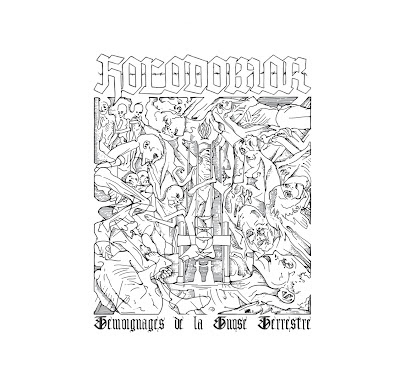 Holodomor is a black/thrash metal band hailing from Plymouth in the UK. “Témoignages de la Gnose Terrestre” is their first EP which has recently been unleashed upon mankind.

Simply labeling Holodomor as blackened thrash metal would be very unfair to the band, as I definitely hear more black metal than thrash in their sound, as well as a lot of early Morbid Angel, Angelcorpse, Bestial Warlust, Gospel of the Horns. The thrash influence really only shines through in the construction of the faster guitar parts, which fly along in a similar manner to “Pleasure to Kill” era Kreator, which fits in rather well with the other influences and strives to give Holodomor a more “unique” sound.

The production is pretty much what you would expect from this type of band, raw as fuck but crystal clear in terms of being able to hear what’s going on. The vocals are a sort of raspy sneer smothered in bludgeoning anger and powered by pure aggression. Guitars have a sort of typical tone for this style of metal, and the bass isn’t super-audible and mostly follows the guitars. I’m not sure what to say about the drums, but they do their job very well.

This is only a short EP, clocking in at roughly 16 minutes, but each track has something to give and none of them overstay their welcome. Any fan of old-school bestial black/death/thrash should be able to enjoy “Témoignages de la Gnose Terrestre”. It’s not original, it’s not sophisticated or flashy, but it’s fuckin’ good fun. Highly recommended for fans of old-school Australian extreme metal, especially.