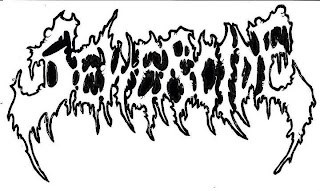 Recently, i received an email from Nick, the drummer of Sewercide promoting his band. Despite the retro sounding name I was surprised to hear classic death thrash and, having watched a promo video earlier in the day by "thrash clowns" Head in a jar and was disappointed, i found that Sewercide's promo fucking ruled so I replied and offered to interview Nick in regards to Sewercide.


How did Sewercide form? Why did you choose death thrash instead of say crossover thrash, black thrash, teutonic/bay area worshipping thrash ?

Funnily enough we all met on a Melbourne website designed to help like-minded musos get together. Tom and Tobi (guitar, bass) found each other first in 2010 I think, then myself (drums) and Hugh (vocals) joined the band about a year later. The idea of playing death thrash was Tobi's  originally. He's a HUGE Demolition Hammer fan, among other bands like Solstice and Morbid Saint. I think he really converted the rest of us to the ways of Death Thrash. We're all big fans of Crossover, Black, Teutonic and Bay Area, but there was just something about the incomparable violence of Death Thrash that had us all sold.

What are your main influences?

Our main influences are oldschool US Death/Thrash bands like Demolition Hammer, Morbid Saint, Solstice, Sadus, early Cannibal Corpse, Obituary etc. Having said that there are loads of non-American bands we love too!

What are plans for future releases

We're doing a split 7" with a great Tasmanian thrash band called Randomorder. That should be released some time in June. After that there's nothing set in stone, but we hope to split with some more killer bands from around the country and world before we record our debut album.

What do you think of the current metal "scene" both in Melbourne and Australia wide? What bands would you recommend to the readers of witching metal webzine

I think the scene here in Melbourne is quite good. There are a bunch of great bands, particularly in the grind/crossover/punk department. As for 'thrash' metal there are only a few bands who really get it and do it properly and well. I guess Melbourne's greatest contribution to thrash is Hobbs' Angel of Death, and it's been fantastic that they've come back and played a couple of local shows recently. It seems to have really revitalised the thrash scene. Australia wide I think the metal scene is really losing out to metalcore and Lamb Of God rip-offs. We're producing some really world class metal bands but none of them seem to get much international (or even national) attention unless they drop-tune to B and chug breakdowns. For anyone wanting to check out some good contemporary Aussie bands I would recommend Hellbringer (blackened thrash), The Mung (slam/grindcore), Party Vibez (crossover) and King Parrot (thrash/grind). 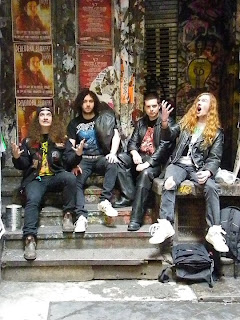 What has the response to the 2 track digital promo been like?

We've had a really good response to the demo. We had been garnering attention from the scene for over 6 months before we had anything recorded so it was great to finally have something for the fans, and even better that they liked it! It's also received positive reviews from several local and international metal communities and blogs which is really encouraging!

What has the response been like to the live shows you've done?

Live shows are always tricky. For the most part we've had a really receptive crowd with mosh pits and even stage diving on occasion. But there are always times when it just doesn't click. It often depends on the venue, the timeslot, the day and the other bands on the bill. On a good lineup though we'll usually have a big crowd and they'll really get into it!

Come to Sydney, bring Maniaxe with you. Somehow convince Teratornis, Hellbringer, Rampage and Kill For Satan to be on the same bill.

Are there plans to play interstate?

We actually played down in Tasmania a couple of months ago with Randomorder whom we're about to do our split with. That was our first experience of 'touring', and it went really well! The crowd down there really loved it. We were told Randomorder are the only thrash band in the city, so it was really great to give the locals something new to mosh to. We'd love to play some east coast dates in the future, hopefully toward the end of the year we'll have a chance, if not next year we definitely will.

What have been some highlights for the band so far?

As a band I'd probably say the whole Tasmanian trip and the great response we had. A personal highlight though was having a crazy group of headbangers knock over a foldback at a 2am show when we expected a dead and deserted room. Another highlight would be playing Sonic Forge (A well established local festival) for only our third gig. Our biggest highlight to come however will be later this year, although we can't say what it is just yet (sorry)!

What long and short term goals do you have for Sewercide?

Short term we'd like to belt out a few more splits and do some Australian touring. Long term I guess the ultimate goal would be getting a record deal and/or overseas touring. We wanna stay true to the music we love and have as many people enjoy it as possible.

Best of luck with the band, is there anything you'd like to say to conclude this interview?

Thanks for the opportunity, and don't forget to check out our music video for Pyrocataclysm (I linked it above)
If you like it you can download the 2 track demo from our facebook for free:

Get into these guys, they're fucking good and deserve much more sapport.


Any band after an interview or review, don't hesitate to email me at PRMTVLTRS@hotmail.com
Posted by PRMTVLTRS at 3:57 PM

Awesome great band. Knows that hard work and the love of metal is what it takes. Keep on thrashin' from Gabe - Randomorder