Begrime Exemious - Visions of the Scourge

Begrime Exemious is a four-piece black/death metal act from Alberta, Canada, featuring members and ex-members of Weapon, Antediluvian and A.M.S.G. “Visions of the Scourge” is their second full length album, which came out in April this year. 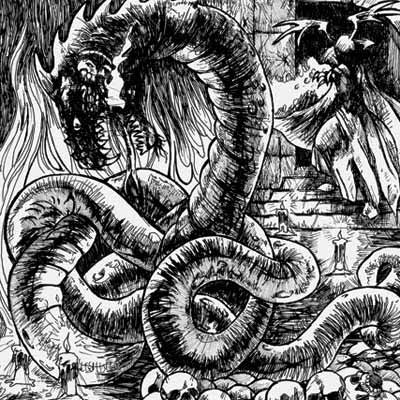 Unlike their contemporaries, Begrime opts for a more speed-focused and straightforward sound. The expected black/death metal influence is still highly prevalent in the music but there is also a strong thrash metal vibe in the riffs and a healthy dose of old-school punk attitude in the way the band handles their instruments, reminding me of a more death metal infused Bestial Mockery. These are all good things.

One of the cooler things you’ll notice when listening to “Visions…”, is that the raw production used allows the music to sound so much more organic, almost as if the whole album was recorded live. This feeling of energy and attitude coupled with the filthy production values and the simplicity of the songwriting really sets Begrime Exemious apart from a lot of black/death metal bands, in my opinion.

Every track on this album stands out, making it damn near impossible for myself to choose a favourite. You could pretty much look up any song from “Visions…” on YouTube and get a good idea of the type of things you’ll hear all over the album. That’s not to say the songs sound the same at all, because they don’t, this is just a very consistent record.

There’s nothing else to say about this album, as it really is a very straightforward beast that speaks for itself, but if you like raw and filthy metal that packs a punch; you would be doing yourself a favour by getting into Begrime Exemious.