Morbidity is a death metal band from Bangladesh who formed in 2011 and have just released their first demo tape, entitled “Pits of Eternal Torment” last month on German label Imperium Productions. 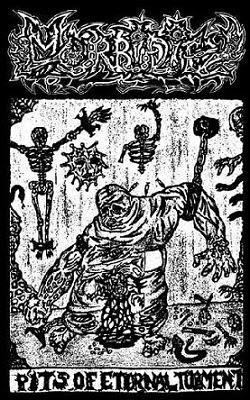 Morbidity play a very primitive, pure and old-school style of death metal firmly rooted in the early 90’s. On this demo you’ll hear nothing but old-school death metal in the truest sense. There are shades of Finnish and Swedish influence to be found after a few listens, but it’s clear these young men owe the bulk of their influence to two long running classic American bands; (very early) Morbid Angel and Nunslaughter (not surprising since the fourth track is a live cover of “Killed by the Cross”).

The production is very raw, sounding like an 80’s demo tape, but it’s executed well since you can hear everything that’s going on, still. The guitar tone is heavy as fuck and suits the ripping death metal riffage exceedingly well the bass isn’t very audible, but you can tell it’s there, the drum work is great and the vocals remind me of a young Kam Lee. What more could you ask for from a young band paying tribute to the old-school lords of death while also bringing forth their own brand of filthy metal? This really is meat and potatoes death metal meant only for true fans of the old-school.

The only criticisms I really have about “Pits of Eternal Torment” are that I wish it was a bit longer, since 11 minutes doesn’t feel like enough time to showcase the bands potential and that the production could be better, but I’m sure that will be worked out on their future releases since this IS a bloody demo tape, after all! And a fucking good one at that.