Gospel of the Horns – Ceremonial Conjuration 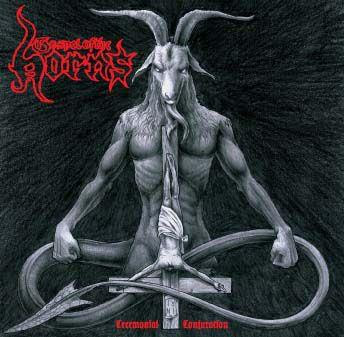 Gospel of the Horns have been one of my favourite bands for a few years now, and quite possibly my fav of the black/thrash subgenre of metal, so, you can imagine their new EP “Ceremonial Conjuration”, which will be officially released by Invictus Productions on June 8th 2012, has been highly anticipated by me this year. Gospel has been going strong since their formation in 1993, however often with long breaks between releases. Everything they have put out to date has been absolutely killer black/thrash in the vein of early Bathory and owes clear kudos to the German thrash metal scene of the late 80’s. It has been over five years since the band has put out any new material, but let me tell you right now; it has been well worth the wait.

From the opening riff of “Sorcery and Blood” you’re instantly forced to start banging your head to some of the tastiest thrash metal released this year since the Ketzer album a few months ago. All the standard GOTH trademarks are present, from the powerful drum rhythms, to the heavy blackened thrash riffage to Howitzers’ signature evil raspy vocals. Special mention also goes to the incredible production job; I can hear every instrument perfectly and no one instrument overshadows the others, leaving room for the listener to focus entirely on the actual songwriting.

Speaking of the songs; there are four originals and one cover (of a band named Goatlord, who I have not heard, either way; it sounds great), my personal favourites being the absolute belter of an opening track “Sorcery and Blood” and “Awakening”. However, the other two original songs stack up and I don’t have any complaints about them or the cover track.

Prepare for the release of “Ceremonial Conjuration”. June 8th 2012, mark it in your calendar and buy or die!