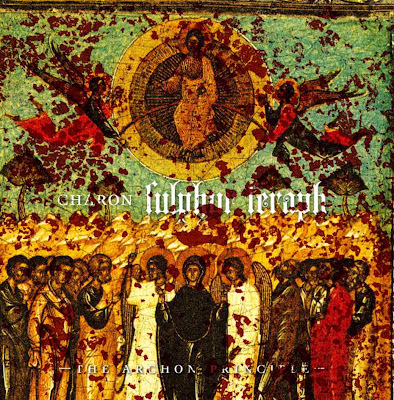 Charon is a two man band from Germany. I’ve often seen this band referred to as black/thrash, but I would actually classify them as an eclectic mix of black and death metal with occasional thrash tendencies. “Sulphur Seraph (The Archon Principle)” is their debut album and was released back in January.

I find the music Charon evokes to be very dense and full of many different ideas yet not overflowing or without direction and purpose. Musically they remind me a lot of the Canadian band Weapon and Australian black/death metallers Denouncement Pyre in the way they seem to effortlessly switch styles and even genres in the one song; ranging from a straightforward black thrashing attack to warlike bestial black metal to dark and occult death metal. All the tracks flow seamlessly together whilst harbouring enough variety to please just about any fan of underground extreme metal, even the vocals change with the feel of the songs, ranging from; demonic shrieks to evil chants to cavernous gutturals to pained screams and spine-chilling whispers. The production on “Sulphur Seraph…” is rather raw, as one would expect, but still evenly mixed in a way that it feels fresh and accessible, despite how dense the actual music may be.

What really interests me about this album and keeps me coming back over and over is how they’ve managed to blend so many styles without sounding forced or artsy at all. Charon has really produced a complete package with their debut album and “Sulphur Seraph…” should definitely be considered as a top contender for album of the year. This is one of the most original releases you will hear in 2012, don’t let it slip by you.