Mass Burial – Of Carrion and Pestilence 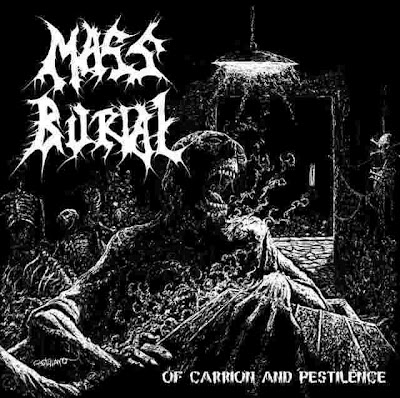 So, it seems the recent trend of paying tribute to the old-school Swedish death metal scene has stretched outside of Sweden, with bands such as Terminate from the US and now Mass Burial from Spain catching my attention (and one would assume many more popping up all over the place!). Mass Burial have been active since 2002, but have released nothing until the recent release of their debut full length. It would have been easy to write these guys off as just another trend hopping death metal band if I failed to notice how long they had been around for.

So, what can one expect to hear on “Of Carrion and Pestilence”? Well, as I mentioned above; these Spaniards take very obvious influence from the early 90’s Swedeath scene, most notably early Grave and Entombed with a splash of Autopsy-esque doominess scattered throughout. You’ll hear that familiar Sunlight guitar sound, the driving d-beat punk influence that Entombed were known for in the “Left Hand Path” days and Chris Reifert sounding growls. There’s plenty of good songs and headbangable riffs to be found on this release, but unfortunately, it does suffer from a case of “been there, done that”… and I mean, I have no problem with more cool Swedeath worship, it’s certainly better than what a lot bands are doing these days, but it is starting to wear a bit thin on me personally.

To sum things up; there are some killer songs on here, like: “Intense Genital Punishment”, “Tomb Desecrator”, “Post War Psychosis” (probably the highlight) and “Only One Bullet Left”, but the truth is you’ve heard them all before. Definitely pick this up if you can’t get enough of old-school Swedish style death metal, as it is a very enjoyable album, it just happens to be more of the same. Not that there’s anything wrong with that.