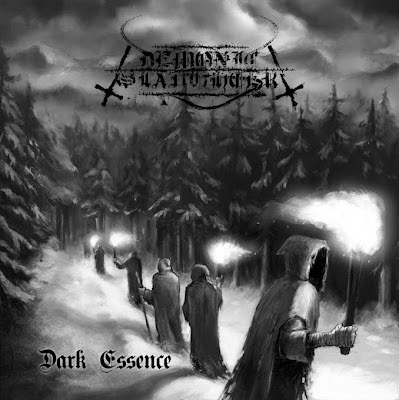 Demonic Slaughter isn’t a band that I expected to hear anything new from in a while considering their latest full length “Revelations of Death” only came out late last year, but nonetheless, their very active and prolific label Hellthrasher Productions has now unleashed their next EP “Dark Essence” upon humanity.

When I first heard “Revelations of Death”, I had no clue what to expect, as it was the first time I’d even heard of Demonic Slaughter, but, I was rather impressed with their personal take on the traditional black metal formula. As on their last release, there is a lot more variety than your average 90’s style black metal band; you can expect the standard tremolo riffs, of course, but also doomy passages, extremely varied (for this style) vocals, weird noisy almost ambient tracks and a hell of a lot of catchiness to boot. The production is very clean for black metal, which may drive the kvlt kiddies away, but I think it suits the band fine and doesn’t serve to hinder the dark atmosphere.

Check out the tracks “Into the Unknown”, “Descending towards Oblivion” and “Blades of Decay” to get a good idea of whether or not Demonic Slaughter is your thing. Personally, I rather enjoy them and can’t really fault them for anything. They’ll never be my favourite black metal band, but they do make for a refreshing listen every now and then. I would also consider them a good band to introduce to black metal newcomers.