A few months ago I reviewed Escanium’s recent EP “Rex Verminorum”, which I thought was a pretty damn solid slab of death metal, heavily influenced by Vader, the early Swedish bands and a bit of Morbid Angel and Obituary. Since then they have released a split with a band called Incarceration, which I know little about, and finally, since being active about four years; their debut full length album “Excruciating Existence”. Released on Hellthrasher productions, this may well be one of the best releases this up and coming label has put out so far. 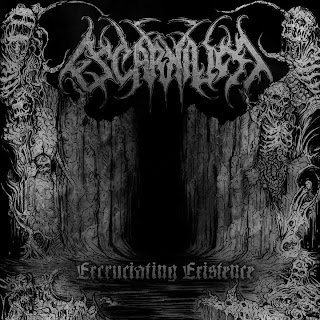 "Excruciating Existence" tends to follow a similar musical template to what they did on earlier releases, except now they have also injected a dose of Incantation-esque dark atmosphere into the music, which in my opinion, does wonders for their sound and freshens the formula up quite a bit. These boys from Brazil are definitely starting to show off their song writing chops a lot more on “Excruciating Existence”, ranging from the bludgeoning Vader and Tampa Bay worship to fleshripping Swedeath plodding of their earlier works to doomier passages which illustrate the aforementioned Incantation influence. To put it simply; this band takes influences from many different styles of old-school death metal and mixes them in a way that comes across as rather familiar, yet somehow still fresher than your average modern day death metal act paying tribute to the early 90’s.

The vocals are your standard Craig Pillard impressions with a bit of Glen Benton thrown in for good measure. The guitar tone is dark and suffocating yet still keeps the old-school chainsaw sound prevalent on their earlier releases. The drumming is nothing special, but is competent and pushes the pace along perfectly. The bassist gets in some cool fills and plays his role extremely well, which is often a rare trait in underground metal bands.

Listen to songs such as; “Salvation through Zyklon-B”, “Self Proclaimed Messiah”, “Death Metal Terror” and “Covered in Decadence” and you will notice that they speak for themselves as great standalone songs and part of a killer album chock full of no-nonsense death fucking metal, making this one of the better DM records that have been released amongst a sea of mediocrity this year.