Vilifier is a pack of drunken retards spread between Brisbane, Sydney and Darwin. They play old-school black/death metal in the vein of Profanatica and early Beherit. “Rehearsal MMXI” is their first and only release so far, but they’re working on two 7”s currently, which will be released on Supremacy through Intolerance and Iron Bonehead. 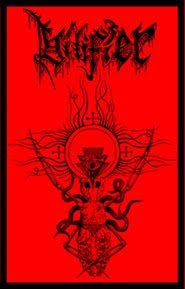 The production on this tape is very raw, adding extra elements to the dark atmosphere invoked by the music itself. The guitars and bass have a filthy tone similar to Profanatica, but not as low-end as Ledney and co. The drumming sounds pretty basic, but it does the job, and you can’t expect too much from a drummer who munches on hamburgers while playing.

All three tracks on the “Rehearsal MMXI” tape are good in their own way, each one stretching out to a length between four and five-and-a-half minutes, giving you plenty of time to soak in the filth. The short length of the demo is both good and bad, as it doesn’t really need to be any longer to make its’ point, but it also leaves me wanting more!

P.S. I have permission from the band to share a mediafire link to the demo on this page, so, feel free to download and check it out for yourself!
Posted by Vagabond at 6:11 PM

Great stuff, have been digging this for a while.
Look forward to seeing them at Evil Invaders.
Good to hear they are drunken retards...I would buy them a few beers!!

Click on the words "mediafire link". If this doesn't work; send me an email and I'll fix you up.

Must've been the only words in that post I hadn't hovered over -- thanks!

They were killer live at Evil Invaders, by the way.