Pseudogod is a black/death metal band hailing from Russia who have been active since 2004. So far they have put out a demo, three splits (Including one with Blaze of Perdition, in 2009 a four-way split with; Teitanfyre, Ill Omened and Gehängter Jude in 2010 and a split with Morbisidad in 2011), a DVD of live material and a compilation album. “Deathwomb Catechesis) is their debut full length which has recently been released in April 2012. 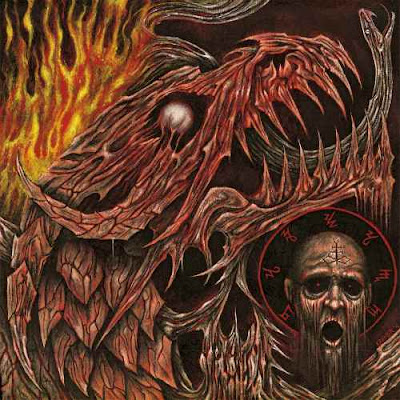 Earlier in their career, Pseudogod displayed a musical approach similar to that of Teitanblood and Archgoat as well as obvious influences from the usual bestial black metal suspects; however, on “Deathwomb…” you can also hear shades of Angelcorpse-esque pummeling and the twisted riffage present in Morbid Angels’ early works. This added influence was most unexpected but certainly not unwelcome. Listen to the song “Malignant Spears” to hear what I’m talking about. On the other side of the coin; “Azazel” is a slow, brooding and almost ritualistic number that sounds more like what I expected to hear on this album… and then there’s “The Antichrist Victory”, which wouldn’t sound at all out of place on an Incantation record! These Russian extremists really have all their bases covered when it comes to appealing to fans of old-school black/death metal.

Pseudogod have blown me away with their debut and this would be my favourite album of 2012 so far. Don’t sleep on this one!