Ectovoid – Fractured in the Timeless Abyss

Polish based Hellthrasher Productions has to be one of the busiest labels I’ve come across. Nearly every month they’re working on putting out and promoting a new release! Their latest offering is the debut album by Ectovoid; a death metal band hailing from Alabama, of all places. 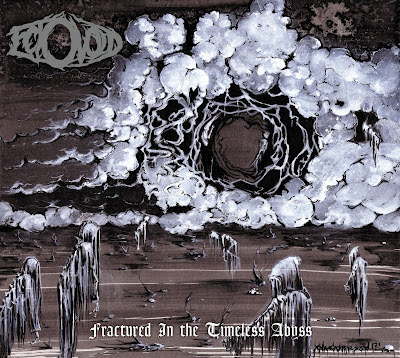 Ectovoid plays a raw, cryptic and atmospheric form of death metal, taking heavy influence from classic old-school bands such as Immolation and Autopsy and mixing it in with a bit of European black metal and a sprinkling of Finnish death metal, then, shrouding it all under a murky and dense atmosphere in a similar fashion to bands like Portal, Ritual Necromancy, Eskhaton and the like. There’s a lot going on in this record and it will probably take most listeners a few listens to digest everything. You’ve got some dirty sludgy riffs mixed in with some black metal-ish tremolo sections, death/doom passages, mid-paced parts that resemble early Autopsy and some real dark and primitive moments as well. Lyrically the band focus on space, dreams, transcendence and abysmal darkness, the music fits these themes rather well.

The production is surprisingly clean for something so enshrouded in darkness, but somehow it works and doesn’t really affect the atmosphere in a negative manner. I personally would like to hear them try something a bit darker sounding on future releases, but time will tell what the band decides to do. The songs themselves work best as a whole unit of work, rather than individual tracks to put on to a mixtape, with no one particular song standing out above the consistency. Luckily, though, “Fractured…” is entertaining enough throughout the full 40 minute running time that it’s not difficult to sit through and soak in the whole thing at once.

It is really refreshing to hear something that’s not just straight ripping off Entombed, Dismember and Grave or Incantation/Immolation and/or Autopsy for a change. It’s not about to top “Contragenesis” as my favourite death metal release from the first half of this year, but it certainly comes close in terms of quality and enjoyment.

If you haven’t looked into any Hellthrasher releases yet, I would strongly recommend starting with “Fractured in the Timeless Abyss” as this is best album they have put out so far.