Mongrel’s Cross - The Sins of Aquarius 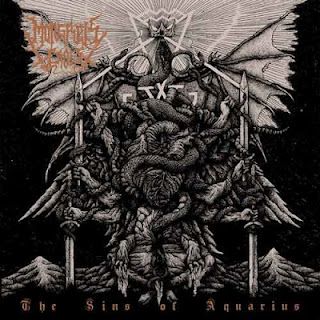 Mongrel’s Cross is a three-piece black/thrash band who I got into when I found a promo CD of theirs stuffed into my pocket after a drunken night last year with no recollection whatsoever of how I came into possession of this disc. Their style is pretty straightforward black/thrash, obviously influenced by other Australian bands such as; Gospel of the Horns, Vomitor, Assaulter, Nocturnal Graves and Deströyer 666. They have just dropped the CD release of their debut album “The Sins of Aquarius” on Hells Headbangers, apparently to be followed by the vinyl release in July. They’ve also recently put out a split with Innsmouth, which I’ve yet to hear.

The first thing that someone who has heard “Whoresanna” or their demo will notice is that the band sound a lot more tight and have added in a prominent death metal influence and a few epic metal tinges into their rough and raw black/thrash formula, proving this album to be a very interesting ride. A lot of the stuff present on their early releases is still there; heavy and evil thrashing riffs, snarling vocals full of attitude and the punky drumming that drives everything along at just the right pace. The rough and raw feel is still there, it’s just slightly buried under a semi-evolved approach, which suits the band surprisingly well. I really wasn’t expecting the sound to change much on the full length, but I’m certainly not disappointed.

The production job isn’t too different from the “Whoresanna” 7inch in terms of how the mix sounds; just cleaned up a bit, as you would expect on a full length release. The songs themselves are excellent, showcasing some of the bands strongest writing to date. The standouts, for me, are; “Rabid Inception”, “Lead them from the Promised Land” and “Indulge the Temple”.

With releases like “The Sins of Aquarius”, the new Gospel of the Horns EP and the recently recorded, soon to be released album from Hellbringer, who needs fuckin' useless retro thrash?