Writhing is a band from Detroit, Michigan who play a brand of death metal that sounds thrashy and “brutal”. They’ve been active since ’03 and previously released a demo and an EP. “Indomitable” is their second EP and they also have recently put out a split with label mates, Ad Patres. 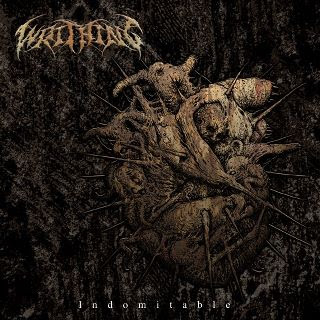 I can hear a variety of influences in Writhings’ music; ranging from 80’s thrash metal (especially evident in the drumming) to Tampa Bay style death metal to modern day technical/brutal death metal (not my thing, but whatever). The production on “Indomitable” is very clean-cut which might put a lot of people off, but I think it’s mixed in a way they keeps it from bothering me too much. Each instrument can be heard clearly and nothing really overpowers anything else. It’s clear these guys are skilled musicians and know their way around their instruments, managing to sound pretty technical in parts without jerking off all over the place. I wasn’t much a fan of the vocals, however, sounding like they’d be better suited to a blasting grindcore band rather than a thrashy death metal band.

Even though Writhing play a style of death metal that doesn’t often fit in with my tastes, I still found enough to like in this EP and will revisit it for further listens in the future. Fans of more modern style death metal should enjoy “Indomitable”, although I wouldn’t go around recommending this three-track EP to old-school diehards.