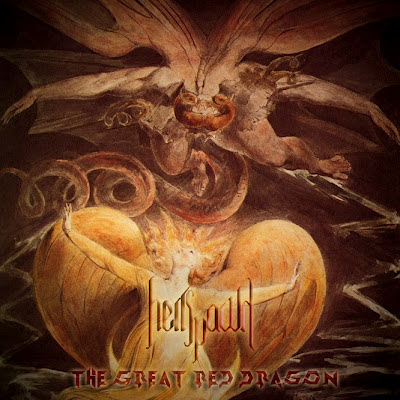 Hellspawn is a 4-piece death metal act from Poland. They play a pretty fast and heavy brand of death metal, taking obvious influence from “Covenant” era Morbid Angel and Polish death tyrants Vader, leaving them sounding somewhere between Angelcorpse with more death metal and Diabolic with less blast beats. Having been active since 2003, they have released a respectable discography so far including; a demo released in 2005, a three-way split with Hateful from Italy and Impureza from France in 2006, a full length entitled “Child of Hell” in 2010 and now their second full length “The Great Red Dragon”.

The album sounds great production-wise, with a nice crisp mix that allows you to hear everything and really take notice of the bottom heavy bass-tone and huge guitar sound that launches itself at you from the speakers. The vocals are stock-standard growls and snarls sounding something like a cross between young Dave Vincent and Martin Van Drunen, occasionally duel-layered to great effect. The drumming doesn’t change too much throughout, usually opting for straightforward blast beats, but they fit the music well enough to get by.

There aren’t really any stand-out tracks, as they tend to blend in together and follow a similar path, which is my only real complaint regarding “The Great Red Dragon”, however, running in at just under 28 minutes, it doesn’t matter too much, as you don’t exactly have time to get bored and can just focus on enjoying the tunes.

This is well played and straightforward death metal. Fans of classic 90’s Polish and Floridian death metal will dig it; others may find it a bit stale. I personally enjoyed this quite a bit, having heard too many Swedish clone bands recently and needing to hear something different for a change. It’s the type of death metal that I like to throw on when I need to switch my brain off for a bit and just go crazy and let off some steam. Fun stuff.