So-called “funeral” doom has never really been my style of doom metal, as I always found it really difficult to get into and preferred more straightforward traditional doom and death/doom bands; however, there are a couple of bands that have caught my attention in this style. Namely: Winter, Mournful Congregation, Evoken and diSEMBOWELMENT. Unfortunately, I never really got into diSEMBOWELMENT until well after they split up. Luckily for people like me, a couple of former members recently formed a “continuation” band of sorts, known briefly as d.USK, playing live sets of old diSEMBOWELMENT tunes, and now d.USK has finally evolved into a full fledged project under the name Inverloch. “Dusk | Subside” is their first EP, which was recently released on Relapse Records. 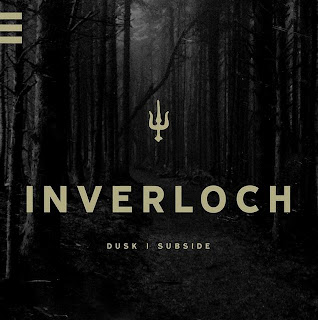 diSEMBOWELMENT originally caught my attention due to the strong elements of death metal and grindcore mixed in with their extremely slow doom metal styling. There was just something about that strange and eclectic mixing of genres that really grabbed and moved me. “Transcendence into the Peripheral” will always stand tall as one of the most monumental and importantly influential metal albums. Inverloch basically picks up where diSEMBOWELMENT left off; playing some of the most crushingly devastating music I have ever laid ears upon.

The music on “Dusk | Subside” is pretty much everything you would expect given the history of the band members; absolutely soul crushingly heavy, very atmospheric and dark and shockingly varied in style. Beginning with utter silence leading into some beautiful clean guitar which builds up to absolute chaotic madness and then slowing down to a total crawl, “Within Frozen Beauty” is the best track to be found on this EP and perfectly descriptive of Inverloch’s general sound. “The Menin Road” is very different, focusing mostly on atmosphere and featuring only one riff and seemingly random shrieks in the background, leaving this as my least favourite song on here. “Shadows of the Flame” follows a similar path to the opening track and exhibits a few subtle progressive elements, which I’d like to hear more of on future songs.

There really isn’t much else to say about this three track EP that runs for just over 22 minutes, but I think I can safely say that fans of diSEMBOWELMENT won’t be disappointed at all when they get around to checking out Inverloch, and I think it is a most fitting continuation of their legendary doom metal legacy.