Shroud of the Heretic – Boiled to Death 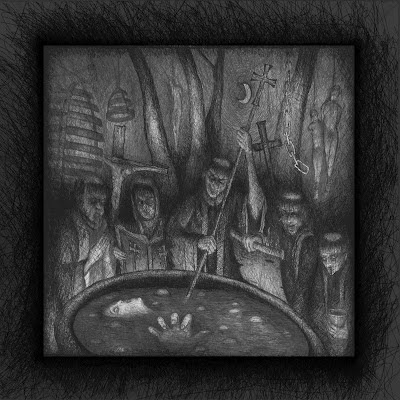 Shroud of the Heretic is a three-piece (formally four, I belief [citation needed]) hailing from Portland, a city in the US which seems to be boiling over with underground metal talent right now, from the bestial sounds of Weregoat to the Portal-esque insanity of Ritual Necromancy to the sludgey doomy sounds of Aldebaren. Shroud of the Heretic play pure old-school death metal worship, mixing dense and doomey structures a la Cruciamentum and Vasaeleth with mid-paced chugging in the style of Danish death metallers Undergang.

The production on “Boiled to Death” is dense and soul crushing whilst remaining clear enough that you can hear everything without losing any atmosphere. Perfect for the bands style. The songs themselves crawl and plod along, rarely speeding up to more than a Bolt Thrower-influenced midtempo. The guitars are the main focus of the mix, with the vocals pushed back a little bit and the drums doing their thing in the background, just holding it all together and driving things along.

This six-track, 34 minute EP flows so well that it would be unfair to select stand-out tracks, so instead, I’ve decided to provide a youtube link to the title track: click here. If this doesn’t pique your interest, then nothing will, since, as I said; the whole EP flows together and has such a specific feeling and atmosphere that recommending individual tracks would be a waste of mine and your time.

So, to sum up my thoughts on “Boiled to Death” I will say this; fans of old-school filth-ridden death metal will absolutely love this and as for everybody else? Who fuckin’ cares?

The album cover is actually the hooded "skull" logo. The Boiled to death drawing is the inner sleave art. Thanks for the kind words and review. Cheers!
Thom G