The new Revenge album is something I had be anticipating since its’ initial announcement over a year ago. Unfortunately due to numerous delays and Pete Helmkamp leaving the band, “Scum. Collapse. Eradication.” failed to see the light of day until it was finally released in February this year. Fortunately, it was worth the wait and once again Mr. James Read does not disappoint. 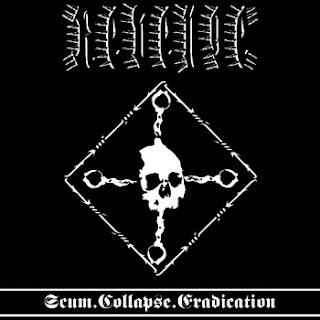 Sounding somewhere between death metal, black metal and furious early 90’s grindcore, Revenge have not always been the easiest band to get in to, with such a harsh and noisey mix of styles going on. Fortunately, for those of you who have experienced issues “getting” this grimy and disgusting style of music, the production on this record is much more well balanced than on previous efforts, letting in plenty of low end while still allowing the drums and guitars to rise above it as the focus of the music.

There are also more distinctive influences starting to peak their head through the signature Revenge wall of noise; elements of early Carcass-esque goregrind are present in the vocal and riffing styles as well as the occasional doom-laden riffs, especially on the tracks “Us and Them (High Power)”, “Parasite Gallows (In Line)” and “Banner Degradation (Exile or Death)” which are coincidentally my three favourites on this release.

All evolution and new influences aside, “Scum. Collapse. Eradication.” is still a Revenge album through and through, and so, still sounds like Revenge. If you’ve heard the band before and are not a fan, this album isn’t exactly going to win you over, but old and new fans alike should dig it. This could very well be their best release yet, coming very close to topping “Triumph. Genocide. Antichrist”, but it will take many more listens to decide my opinion on that particular matter. For now, all I know is that this is yet another release not to be slept on in 2012.