Way back in August 2011 I interviewed Ignivomous’ frontman Jael Edwards and we spoke about their upcoming album “Contragenesis”. Having been released not long ago, this album was one of my personal most anticipated releases of 2012 and now, after repeated listening, I can safely say it was well worth the wait. 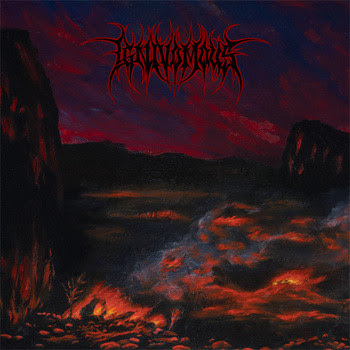 After my first listen, I noticed one very specific thing about “Contragenesis”, and that is that Ignivomous have not tried to “evolve” or “progress” their sound at all, sticking to a deliciously old-school death metal assault, which is a good thing. Obviously there are shades of Incantation and Immolation influence all over the place, as 99% of reviews will blatantly tell you and then ramble on about for a while, but Ignivomous is a band that takes this familiar, overdone template and truly evokes a sound that they can call their own, throwing in other influences such as the odd Bolt Thrower dirge here, an fast and evil Malevolent Creation riff over here or a Grave-esque stomp there, sounding much more dark, chaotic and cryptic… and much less generic and formulaic than their peers who play in a similar style.

The guitar and bass tones are thick and the riffs are heavier than a ten ton truck. The drumming is fantastic as is always from Chris Volcano. The vocals are a generally harsh and low roar, not distinctively sounding like anyone else, but not standing out from the crowd of OSDM vocalists either, suffice to say, Jael has a good voice for this type of death metal. The song structures are extremely varied, often changing from fast and frantic to a slow, doomy dirge within the same song, meaning this is not the type of album you throw on for a light-hearted and catchy experience while you take a load off and have a few beers. “Contragenesis” is the type of record that demands your full attention and multiple listens in order to make the most of your listening experience.

I’ve seen a few people mention in their reviews that Ignivomous sounds like “just another Incantation rip off”, which is clearly not the case at all and I believe these people need to have their ears checked or spend some more time with their releases. I’ve also seen some people already calling “Contragenesis” the best death metal album of 2012, which is a bloody stupid thing to say right now as we’re not even halfway through the year! All complaining about other peoples opinions aside, I do have this to say: “Contragenesis” is a worthy contender for “death metal album of the year” and definitely one of the better DM albums I’ve heard in a while. In my opinion, Ignivimous has produced a must hear album for all fans of raw, filthy and dark death metal and a worthy follow up to their amazing debut “Death Transmutation”.